Archive for the ‘Skylanders’ Category

Skylanders Giants are IMMENSE! Our Review

T and D entered a competition just before Christmas, with the chance to become part of “Team Skylanders” with Tots 100, to view their entry click here. They were overjoyed to be chosen to be amongst the winners and looked forward eagerly to receiving a Skylanders Giants starter pack for trial and review. 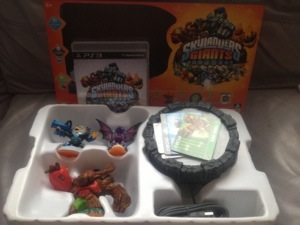 T has answered some questions set by Tots 100 further down in this post and written his impressions of the game, but I wanted to share what I thought of the game as a parent (and fellow player!) first.

The game is intended for age 7 and over, which I think is about right. The Skylanders look very cute as toys but seeing two characters battling on a screen might be a bit frightening for younger children.

It’s very easy to set up to play, literally turn on, choose your Skylander and off you go. What I especially liked was the guidance given all the way through, whether it’s a visual prompt for which button to press, or narration suggesting how to bring down a baddie! 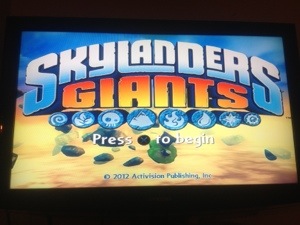 There are 16 separate chapters, each set in their own “world”/area with different challenges. There are opportunities to gain extra goodies by playing little sub-games; Skystones (which T especially liked) and a series of puzzle games (which got harder the more you progressed through the chapters).

Pictures 1 to 3 are of the Skystones, the last one is the puzzle: 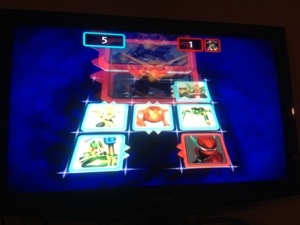 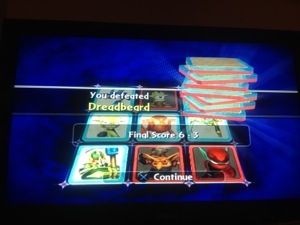 At the end of each chapter, there’s a summary of how you’ve done etc; 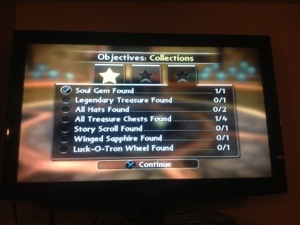 We have the previous Skylanders game on Wii and the difference between the two, graphics-wise and challenges is amazing.

It’s a great game and I’ve really enjoyed playing it too. T thinks it great that his mum has got further in it than one of his football mates…brownie points for me!!

Fab game, totally recommended from me.

My favourite level was Chapter 16 – Bringing order to Kaos! – where you have to destroy the Iron Fist and defeat Kaos.

The Skylander I liked the most was Tree Rex because of his awesome ability to cause a shock wave to throw enemies way back so you are not stuck in a circle filled with beasts.

I enjoyed playing Skystones and defeating the other players, espiacally Captain Dreadbeard. I keep thrashing him 8-1 and 6-3 so I keep collecting Skystones .

Now T’s answers to the questions:

1. What did you think of the game when it first arrived?

When it first arrived I thought: “Wow! I can’t wait to try it out! ” When I did, the first thing I recognised was that the graphics had improved. It stood out much better than the first Skylanders.

The game is really easy to play and once you examine the instructions and controls you start to really get the hang of it.

3. Do you like the new Giants characters? What’s your favourite character?

I really like the new giant characters because they are strong and when you walk into a chompy, the chompies die and you go further in the chapters.

Tree Rex is my favourite giant character because his upgrades are so good, they could blow your mind.

I. liked battling the enemies and playing Skystones matches the most. The Skystones matches were really tense, because you didn’t know who was going to win. The hardest enemies are probably the Arkeyan Juggernaut and the Goliath Drows.

I thought you couldn’t improve anything except on the first levels. To make it clearer where you go to get treasures and collectables.

5. What other Skylanders accessories or figures are you hoping to try out in the future?

I’d like to try the undead warrior Chop Chop and water giant Thumpback, because from the videos, they look really good.

I love reading and would like to read Skylanders books, we’ve only found one in the shops so far. 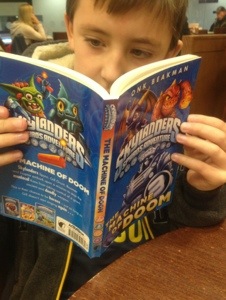 My sister would love to play with Skylanders soft toys and the megabloks, she really enjoys looking at the portal when the Skylanders are on it: 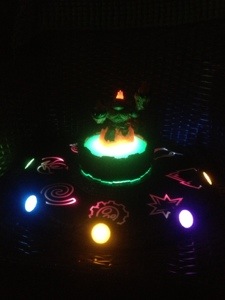 Thank you from us all, we’re loving being part of the team!